This year, all students in Grades 4 and 5 are participants in Buchanan's new choir program. Choir takes place on Day 4 of the school day cycle, during period 5 (1:05-1:42). During this time, all grade 4 and 5 students meet and rehearse music to perform for others. Our purpose is to use our music to reach out to our community.
So far we have two projects that are starting to take shape:

1) A partnership with Heritage Lodge personal care home. We are hoping to visit residents on a semi-regular basis and sing for them, as well as lead some audience participation music.

2) A partnership with Oakview Place personal care home. Students will be writing letters to residents inquiring about their favourite types of music, favourite songs, favourite singers, etc. Once they receive replies from participating residents, they will begin to learn some of the music they wrote about in their letters and perform for them!

Our Grade 4/5 Choir will also perform at other events such as our Remembrance Day service and winter concert.

We are currently looking for a name! One idea: Buchanan's Got Heart. Any others?
Posted by Buchanan Music Program at 07:49 No comments:

Kindergarten classes have each had music 3 times so far, and have shown such enthusiasm for music! A couple of the things we've done so far: 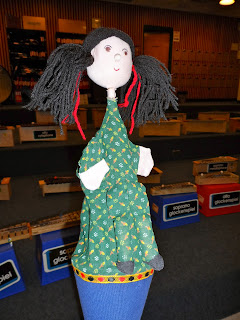 The Bear Hunt
The Kinders love this one! I have posted it on our YouTube channel so that students can have fun with it at home too!
Click here to do the Bear Hunt!

Instruments
So far the Kindergarten students have played the Rhythm Sticks. They learned how to tap them gently, and follow a conductor so they know when to stop. They are working on tapping a steady beat!

It's back to school time! Yay! I am so happy to see all of you again! I am looking forward to a fun school year with you!

Here's what's up so far!

Grades 4 & 5 (Rooms 13, 17 & 19) are starting the year with the song "Somebody That I Used To Know" by Gotye. We began by watching a cover of the song by the group Walk of the Earth, where each member plays one part on the guitar.
From left to right:
Player 1: Uses the guitar as a percussion instrument
Player 2: Plays the ostinato (a repeating pattern) which is actually just IIV to I chords
Player 3: Plays the guitar melody
Player 4: Plays the off-beat chords (on beats 2 & 4)
Player 5: Plays accent chords


Then we watched another version of the song: Gotye saw that so many people were doing covers of his song that he made a compilation video of a whole bunch of YouTube videos from around the world!


Next week we will be learning to play this song on the Orff Instruments:

Grades 1/2/3 are learning the Tritsch Tratsch Polka by Johann Strauss. We have coupled it with Deborah Ziolkoski's story and movement about the ringmaster and tightrope walker from Fun With Composers. We are learning about ABA form in music (same/different/same), and a little bit about the life of composer Johann Strauss.

Here is a recording of it - ask your child to show you the story and movement!


Did you know that the Tritsch Tratsch Polka is also used in the video game Mario & Sonic at the London 2012 Olympic Games? It can be found in the Synchronized Swimming section!